50 Years of the Fair Housing Act

Safe and affordable homes, free of discrimination, should be equally accessible to all. This edition of Rural Voices explores the state of fair housing half a century after the adoption of the Fair Housing Act and includes contributions from a federal agency, national nonprofits, and practitioners in the field.

In a nation founded on the principles of justice and equality, it is unacceptable for anyone to be denied the housing of their choice.

Rural fair housing advocates rely on outreach, education, cultural sensitivity, and partnerships to address issues that may not have been evident 50 years ago.

In early 2018 HUD suspended implementation of a regulation put into place in 2015.

Vermont’s Fair Housing Project encourages residents and local governments to improve zoning and permitting in order to further fair housing and the development of affordable housing.

Disaster recovery must be designed to be fair for all, even if pre-disaster housing situations were not.

Nuisance and Crime-Free Ordinances: The Next Fair Housing Frontier
by Renee Williams and Marie Flannery

Fair housing laws may conflict with local laws and policies that penalize tenants for calling law enforcement or having a history of arrest or conviction.

The recent increase in hate crimes includes housing-related hate activity, which can have criminal or civil remedies.

A statewide coalition supports victims of hate crimes, including crimes that are related to housing. 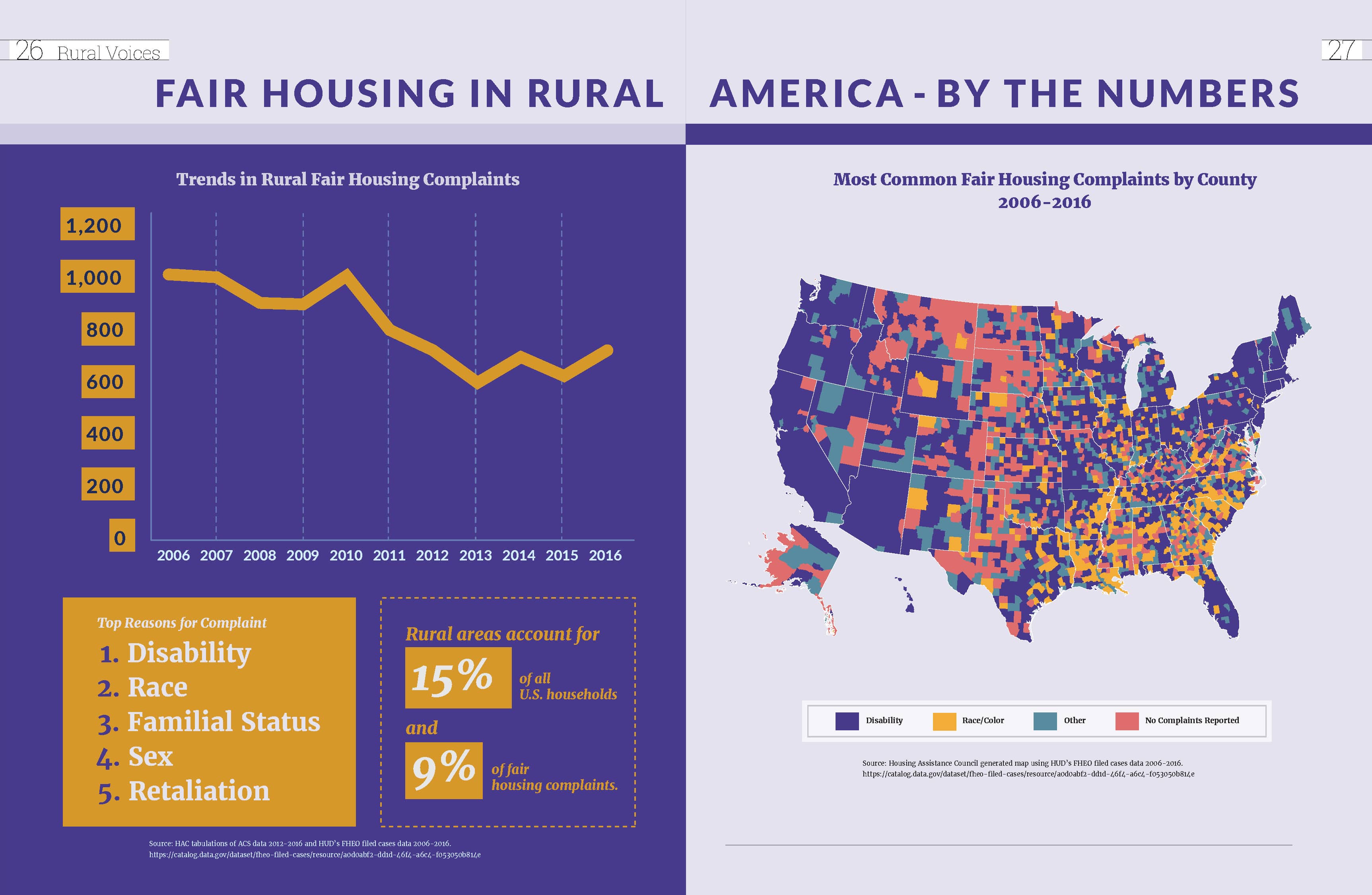 Fair Housing in Rural America – By the Numbers

Rural Voices would like to hear what you have to say about one, or all, of these issues. Please comment on these stories by sending a tweet to #RuralVoicesMag, discuss on the Rural Affordable Housing Group on LinkedIn, or on our Facebook page.

Final FY18 funding bill supports housing programs.
On March 23 President Trump signed into law an omnibus funding bill for fiscal year 2018, which began on October 1, 2017. Under the increased cap on FY18 spending, the final agreement raises funding levels for several housing programs above the amounts in both the House and Senate FY18 bills. These include Section 502 direct, Section 515, Section 542, and others at USDA, as well as HOME, CDBG, Section 202, Section 811, the Public Housing Capital Fund, tenant- and project-based vouchers, and others at HUD. The law makes some program changes as well. It increases Low Income Housing Tax Credit allocations for 2018-2021 and allows income averaging in LIHTC properties, making 60% of area median income the average income limit for all units in a property rather than the income limit for each individual apartment. It expands HUD’s Rental Assistance Demonstration for public housing, including raising the cap to 455,000 units, covering some Section 202 units, and extending the program to 2024. There is enough funding for this year’s preparations for the 2020 Census. A new pilot program of rural broadband loans and grants receives $600 million, to be administered by USDA’s Rural Utilities Service; USDA says that amount will leverage nearly $1 billion in total new rural broadband projects. [tdborder][/tdborder]

a. Section 504 grants and Section 533 grants would have been rolled into a new Rural Economic Infrastructure Grant program. This change is not included in the final bill.
b. Figures shown represent budget authority, not program levels.

a. The House bill specified that its entire VASH appropriation would be for renewals. The Senate bill would have renewed current VASH vouchers and provided $40 million for new ones.

Area eligibility changes proposed for rural housing programs.
Proposed changes to eligible areas, based on the “rural in character” criterion, are posted online. To see changes, select a tab to view a map for single-family, multifamily, or other programs, then select eligible properties, previously eligible areas, or proposed ineligible areas. Send comments by April 23 to RD State Directors, who will make final eligibility decisions, effective June 4, 2018.

CFPB seeks more comments, extends deadlines.
The Consumer Financial Protection Bureau has issued more requests for comments on specific aspects of its work and has extended the deadlines for some of its recent requests. All are summarized in the table below.

Pilot program to evaluate feasibility of mixed income occupancy in farmworker housing.
Section 514/516 properties that are fully operational before March 28 are eligible for this pilot under an Unnumbered Letter dated February 28, 2018. USDA will study the programmatic and logistical advantages and disadvantages of mixed occupancy in properties that are separated operationally but not physically. For more information, contact an RD state office.

Last Keepseagle appeals rejected by Supreme Court.
Indianz.com reports that on March 26 the Supreme Court declined to hear the final appeals related to distribution of settlement funds from the Keepseagle case, which claimed USDA’s farm loan programs denied Native Americans equal access to credit. This means the money remaining in the settlement fund can now be sent to individuals, tribes, nonprofits, and educational institutions.

SAVE THE DATE FOR THE 2018 HAC RURAL HOUSING CONFERENCE!
The conference will be held December 4-7 at the Capital Hilton in Washington, DC. The HAC News will announce when conference registration opens and when the hotel room block is available for reservations.

NEED CAPITAL FOR YOUR AFFORDABLE HOUSING PROJECT?
HAC’s loan funds provide low interest rate loans to support single- and multifamily affordable housing projects for low-income rural residents throughout the U.S. and territories. Capital is available for all types of affordable and mixed-income housing projects, including preservation, farmworker, senior, and veteran housing. HAC loan funds can be used for pre-development, site acquisition, site development, and construction/rehabilitation. Contact HAC’s loan fund staff at hacloanfund@ruralhome.org, 202-842-8600.
Please note: HAC is not able to offer loans to individuals or families. Borrowers must be nonprofit or for-profit organizations or government entities (including tribes).

HOUSE SUBCOMMITTEE HEARING ON FY15 RD BUDGET SET FOR FRIDAY. At 10:00 a.m. Eastern time on April 4, USDA Rural Development officials will testify on the Administration’s FY15 budget request before the House Agriculture Appropriations Subcommittee. The hearing will be webcast. Updates will be posted on HAC’s site.

WATERS PROPOSES GSE REFORM BILL. On March 27 Rep. Maxine Waters (D-CA), Ranking Member of the House Financial Services Committee, released a discussion draft of a bill that would replace Fannie Mae and Freddie Mac with a lender cooperative and would fund the National Housing Trust Fund. It would also replace the affordable housing goals, instead requiring the cooperative to “facilitate” service to all income levels, including borrowers in underserved urban and rural markets. There are also two proposals in the Senate (see HAC News, 3/19/14) and H.R. 2767, introduced by Rep. Jeb Hensarling (R-TX), which passed the House Committee in July 2013 (see HAC News, 8/1/13).

USDA OFFERS HOUSEHOLD WATER WELL SYSTEM GRANTS. Nonprofits can use these funds to establish lending programs for homeowners, who can borrow up to $11,000 to construct or repair household water wells for existing homes. This year’s competition will give points to high-poverty places and to colonias or substantially underserved trust areas. Deadline is May 27. Contact Joyce M. Taylor, RUS, 202-720-9589.

NLIHC REPORT CONFIRMS HOUSING COSTS STILL OUT OF REACH. The National Low Income Housing Coalition’s annual Out of Reach report, prepared with HAC assistance for nonmetro data, shows a gap remains between rural rent and rural renters’ incomes. NLIHC estimates that the average hourly wage for nonmetro renters nationwide is $10.24, which falls $3 short of the Housing Wage necessary to afford a two-bedroom home at HUD’s Fair Market Rent. The nonmetro Housing Wage is out of reach for those earning the average renter wage in all but two states (Alaska and North Dakota), though the gap is very small in four other states (Arizona, Nevada, Oklahoma, and Wyoming). The report and data for states, counties, and metro areas are online, as is a HAC Rural Research Note.

NEW INDEX SHOWS WIDE OPPORTUNITY GAP FOR CHILDREN OF DIFFERENT RACES/ETHNICITIES. Race for Results: Building a Path to Opportunity for All Childrencompiles indicators on health, education, family environment, and neighborhood poverty into a single index and presents results for each state. Nationally, Asian/Pacific Islander and White children have far higher index scores than Latino and Native American children, and African-American children have the lowest. At the state level, the lowest scores were among American Indian children in South Dakota. Scores vary across states for all groups, but the range of scores is widest for American Indian children and narrowest for Latino children.

REPORT STRESSES HOME- AND COMMUNITY-BASED SERVICES FOR SENIORS. Aging in Every Place: Supportive Service Programs for High and Low Density Communities says such services are a cost-effective way to help older adults maintain their quality of life as they age in their homes. Published by the Center for Housing Policy at the National Housing Conference, the report notes that successful programs in rural places often offer transportation, use existing community centers, or bring services to the homes of those who are unable to travel.

RURAL HOUSING AND YOUTH SPOTLIGHTED IN RURAL VOICES. Looking to the Future: Housing and Youth in Rural America is the latest issue of HAC’s magazine. Sign up online for email notices when new issues are published, or request one free print subscription per organization from Dan Stern, HAC, 202-842-8600.

APRIL IS FAIR HOUSING MONTH. HUD has launched a national media campaign to educate people about the Fair Housing Act. To file a complaint visit HUD’s website or call 1-800-669-9777, or use HUD’s fair housing discrimination app for iPhone and iPad.

BUDGET RELEASE SET FOR APRIL 10. The Obama Administration’s budget for FY14 will be released April 10. HAC will post information and analyses at ruralhome.org as early as possible that day.

RULES PROPOSED FOR RURAL HOUSING STABILITY ASSISTANCE PROGRAM. RHSP, a new HUD program, was authorized by the 2009 HEARTH Act to help address rural homelessness. The grants are intended for counties, who may designate nonprofits or local governments as applicants. The proposed rule would create a new definition of “rural.” It would also revise HUD’s definition of “chronically homeless.” Comments are due May 28. Contact Ann Marie Oliva, HUD, 202-708-4300.

USDA LIMITS POST-FORECLOSURE COLLECTIONS. After critical coverage by the Wall Street Journal and CBS News, RD has decided to stop collecting its losses from Section 502 direct and guaranteed borrowers who lose their homes to foreclosure. The agency will not drop collection efforts that have already begun, however, and will also pursue borrowers whom it believes have the resources to repay government losses. More details are provided in a press release from HAC and the National Housing Law Project and in a second Wall Street Journal article.

GUIDANCE ISSUED ON GRANDFATHERED RURAL DEFINITION. USDA RD issued Administrative Notice 4711 on March 28, explaining that community facilities, business, and utilities programs must apply 2010 Census data to area eligibility determinations as of March 27, but the final FY13 appropriations bill delays the change for housing programs until September 30 (see HAC News, 3/21/13). The housing programs will base area eligibility on pre-2010 Census determinations, including grandfathering, for applications that are complete by September 30, 2013 or filed in response to NOFAs published by September 30, 2013, provided that funds are obligated by December 31, 2013 or the agency administrator grants a waiver. For more information, contact an RD office.

TONSAGER LEAVING USDA. Under Secretary for Rural Development Dallas Tonsager has resigned. An official statement does not indicate his future plans.

ALL HUD OFFICES TO CLOSE FOR SEVEN DAYS. HUD has posted frequently asked questions on its sequestration information page, explaining that virtually all HUD staff will be furloughed and offices closed on seven days between May and August. The exact dates will be posted online when available.

SEQUESTRATION COULD CUT 140,000 SECTION 8 VOUCHERS. A new Center on Budget and Policy Priorities paper, “Sequestration Could Deny Rental Assistance to 140,000 Families: Cuts Come at a Time of Rising Need for Housing Assistance and Will Exacerbate Homelessness,” notes that thousands of others could face rent increases. A CBPP blog post summarizing the report is also online.